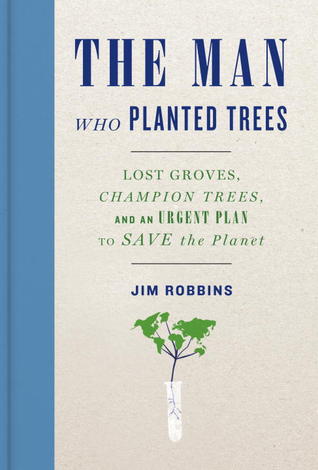 The Man Who Planted Trees: Lost Groves, Champion Trees, and an Urgent Plan to Save the Planet

The Man Who Planted Trees is the inspiring story of David Milarch’s quest to clone the biggest trees on the planet in order to save our forests and ecosystem—as well as a hopeful lesson about how each of us has the ability to make a difference.

“When is the best time to plant a tree? Twenty years ago. The second best time? Today.”—Chinese proverb

Twenty years ago, David Milarch, a northern Michigan nurseryman with a penchant for hard living, had a vision: angels came to tell him that the earth was in trouble. Its trees were dying, and without them, human life was in jeopardy. The solution, they told him, was to clone the champion trees of the world—the largest, the hardiest, the ones that had survived millennia and were most resilient to climate change—and create a kind of Noah’s ark of tree genetics. Without knowing if the message had any basis in science, or why he’d been chosen for this task, Milarch began his mission of cloning the world’s great trees. Many scientists and tree experts told him it couldn’t be done, but, twenty years later, his team has successfully cloned some of the world’s oldest trees—among them giant redwoods and sequoias. They have also grown seedlings from the oldest tree in the world, the bristlecone pine Methuselah.

When New York Times journalist Jim Robbins came upon Milarch’s story, he was fascinated but had his doubts. Yet over several years, listening to Milarch and talking to scientists, he came to realize that there is so much we do not yet know about trees: how they die, how they communicate, the myriad crucial ways they filter water and air and otherwise support life on Earth. It became clear that as the planet changes, trees and forest are essential to assuring its survival.

Praise for The Man Who Planted Trees

“This is a story of miracles and obsession and love and survival. Told with Jim Robbins’s signature clarity and eye for telling detail, The Man Who Planted Trees is also the most hopeful book I’ve read in years. I kept thinking of the end of Saint Francis’s wonderful prayer, ‘And may God bless you with enough foolishness to believe that you can make a difference in the world, so that you can do what others claim cannot be done.’ ”—Alexandra Fuller, author of Don’t Let’s Go to the Dogs Tonight

“Scientists can be confined by their own thinking—they know what they know. It’s amazing for one layman to come up with the idea of saving champion trees as a meaningful way to address the issues of biodiversity and climate change. This could be a grassroots solution to a global problem. A few million people selecting and planting the right trees for the right places could really make a difference.”—Ramakrishna Nemani, earth scientist

“The great poet W. S. Merwin once wrote, ‘On the last day of the world I would want to plant a tree.’ It’s good to see, in this lovely volume, that some folks are getting a head start!”—Bill McKibben, author of Eaarth: Making a Life on a Tough New Planet

This book was printed in the United States of America on Rolland Enviro™ 100 Book, which is manufactured using FSC-certified 100% postconsumer fiber and meets permanent paper standards.

Readers Also Enjoyed The Man Who Planted Trees: Lost Groves, Champion Trees, and an Urgent Plan to Save the Planet

Lone Star: A History Of Texas And The Texans

1912: Wilson, Roosevelt, Taft and Debs -- The Election that Changed the Country

Exposed: The Toxic Chemistry of Everyday Products - Who's at Risk and What's at Stake for American Power

What a Plant Knows: A Field Guide to the Senses

The Man Who Planted Trees: Lost Groves, Champion Trees, and an Urgent Plan to Save the Planet Reviews