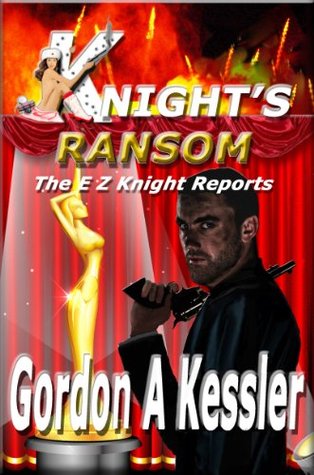 by Gordon A. Kessler

KNIGHT'S RANSOM
For E Z Knight, when it rains, it pours—and it seldom tastes anything like water.
“A sexy, humorous and irreverent thriller series...” — “An action adventure thriller novel like no other!"
E Z has a $10,000,000 contract on his head and a whole boatload of hit men after his ass. Even worse, a young Russian beauty has just handed him a photo of his six-year-old goddaughter wearing a vest wired with enough plastic explosives to bring down the Golden Gate Bridge.

Nowadays, all E Z wants is to be left alone. He seeks an uncomplicated and safe life, living with his golden retriever, Jazzy Brass, on a sailboat in Southern California. But his past won’t cooperate. When, only two minutes before his neighbor’s sailboat blows up in front of him, he’s handed a picture of his best friend’s kidnapped daughter strapped with Semtex, he knows there’ll be no peace today. He’s stared down the Grim Reaper more times than he can remember, but death hasn’t come to harvest someone this close to him since his wife was murdered six years ago.

E Z’s former best friend, Jason Ryder, is up for an Oscar, and the man’s newly divorced wife, actress Stella Hutchins, is E Z’s very hot ex-girlfriend. With their little girl in jeopardy, the Hollywood couple must put on a facade of normalcy on the biggest night of their lives—that could also be their last.

A walk down the Academy Awards’ red carpet is a new experience for an old Leatherneck, but former US Force Recon Marine E Z Knight isn’t shy. He’d do anything to get his goddaughter back safely—be it by bullet or by bedroom—and he must have a little of both to get to the bottom of this one.

Teaming up with a spicy little Russian who carries a Mac 10, an old woman who flips him the bird every morning, and a couple of his old comrades-in-arms, E Z’s determined to track down little Sophie Ryder’s abductors, rescue her, get her home unharmed, and do away with some very nasty bastards, all in short order. But in the hours to come, a deadly old nemesis returns, and a new team of very lethal assassins strikes at his heart.

E Z never liked killing, but he’s good at it, and the next forty-eight hours are bound to be murder.

Knight's Ransom is the third novel in ”The E Z Knight Reports”; a sexy, humorous and irreverent thriller series as well as a somewhat realistic and poignant look at the darker side of life, crime and the human condition. With a modern-day, ramped up "The Rockford Files"/"Magnum PI" feel, a Jack Bauer-capable hero and a "24" pace, this series consists of page-thrumming, stand-alone novels. Please check out the first novel, Knight's Big Easy, and the second of the series, Knight's Late Train, as well.

These are great beach reads and commuter reads—books you'll enjoy on the plane, train or in the car, during business travel as well as on vacation, while in the hotel, the airport or just waiting in line!

Enjoy best-selling action/adventure thriller authors Don Winslow and Clive Cussler, as well as some of the best thrillers in eBooks by indie authors like John Locke and JA Konrath? You'll love Knight's Ransom.

"The E Z Knight Reports" has a special section on the author's website and blog (gordonkessler.com) with info on each of the books, E Z Knight, Jazzy Brass and the "Knight Girls". You'll also find information about the author and his other novels and works.

About Gordon A. Kessler

I am a fulltime thriller novelist, living in the Kansas City metro area with my golden retriever, Jazzy Brass. I’ve taught novel-writing for several community colleges, worked over twenty years for the BNSF Railway, and I am a former US Marine Recon Scout, Super Squad team leader, parachutist, marksmanship coach and troop handler. I enjoys SCUBA, sailing, snow skiing and being with my kids and gra