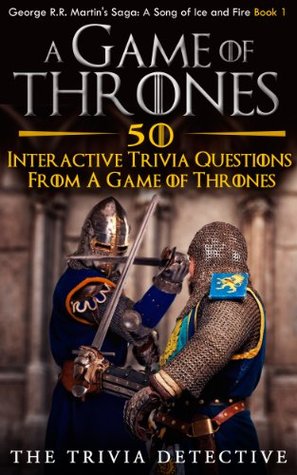 by The Trivia Detective

Due to potential copyright infringement issues, no images from the HBO television series Game Of Thrones were included in the trivia book. There is a link at the end of this A Game Of Thrones triva ebook to a Youtube video featuring a Season 1 HBO preview for those interested in the television series and may wish to put images to the book’s characters, places and events.

A Game Of Thrones ebook is divided into four sections, each of which focuses on different aspects of the book along with 4 possible answers. They are as follows:
A Game Of Thrones Characters- For example- Who was the knight known as the “Kingslayer” and also the heir to Casterly Rock?
Ser Waymar Royce
Ser Ilyn Payne
Ser Barristan Selmy
Ser Jamie Lannister

A Game Of Thrones Places- For example- What is the name of the place where the Stark family made their home?
King’s Landing
Winterfell
Pyke
Dragonstone

A Game Of Thrones More Trivia- For example- What is the name of Arya Stark’s sword?
Pointer
Needle
Lightbringer
Ice

About The Trivia Detective