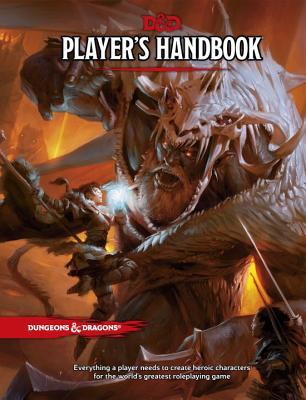 The Player’s Handbook® is the essential reference for every Dungeons & Dragons® roleplayer. It contains rules for character creation and advancement, backgrounds and skills, exploration and combat, equipment, spells, and much more.

Use this book to create exciting characters from among the most iconic D&D® races and classes.

Dungeons & Dragons immerses you in a world of adventure. Explore ancient ruins and deadly dungeons. Battle monsters while searching for legendary treasures. Gain experience and power as you trek across uncharted lands with your companions.

The world needs heroes. Will you answer the call?

Strategi Menjinakkan Diponegoro: Stelsel Benteng 1827-1830 Carl's Doomsday Scenario 100 Things You Should Know About Science OUT OF THE BLUE CLEAR SKY: (A PRIDE AND PREJUDICE VARIATION) Showing My Sister Saving Sara: A Memoir of Food Addiction The Daily Trading Coach: 101 Lessons for Becoming Your Own Trading Psychologist The Seven Decisions: Understanding the Keys to Personal Success Winter House Robert Maudsley: Hannibal the Cannibal

James Wyatt is an award-winning game designer at Wizards of the Coast, and now holds the position of Design Manager for Dungeons & Dragons. He was one of the lead designers for D&D 4th Edition and one of the original designers of the Eberron Campaign Setting, and has written and co-authored dozens of game supplements. He grew up in Ithaca, New York, and now lives in Washington State with his wife