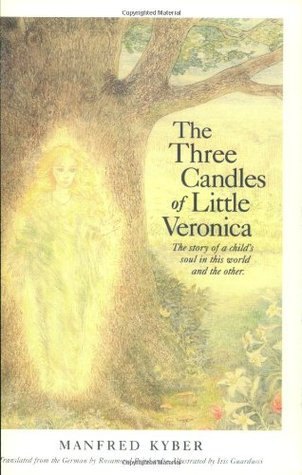 The Three Candles of Little Veronica: The Story of a Child's Soul in This World and the Other

Who with the eye of reverence may discern
How crystals form within the soul of the Earth,
Watch in the quickening seed the clear flame burn,
In life see death, and in decay new birth ...
He who has found his kin in man and beast
And in that kinship God's own Brotherhood,
At the High Table of the Grail shall feast,
Sup with the Lord of Love, taste holy food ...
He, seeking, finds (God's promise shall suffice)
The pathway to forgotten Paradise. --Manfred Kyber


Manfred Kyber's classic Three Candles of Little Veronica is now available again in English. For generations, readers have loved this story and discovered its ability to guide us to the magic of nature and to a deeper understanding of human relationships and karma, reminding us of our responsibility to protect innocent creatures.

The excellent translation and exquisite illustrations combine to produce a first-class edition that you will want to read, reread, and pass on to friends. More than any treatise on the environment, this book speaks to the reader's heart and awakens a sense of caring and responsibility for the world around us.

This is a remarkable and enduring story in the Grail tradition. The author begins with Veronica's early youth, when she can see beyond the physical appearance of things and can converse with a hedgehog, a blackbird, and other residents in The Garden of Spirits. Accompanied by her cat Mutzeputz and guided by her wise Uncle Johannes, Veronica grows beyond innocence and into the life of the House of Shadows, the Baltic town of Halmar, the cursed Castle Irreloh, and the people whose destiny intersects hers.

As the story unfolds, Veronica learns--through a playful elemental and with the help of Uncle Johannes Wanderer--that only a veil separates us from the spiritual world, "and it lifts more often than people today believe." The events of joy and terror in her life lead her to a beautiful reconciliation with this duality and to true understanding of the meaning and mystery of the three candles that mark the turning points in her life.

The writing style of The Three Candles of Little Veronica is unique and idiosyncratic. Kyber's earnestness and deeply held spiritual values, as well as his profound concern for the well being of animals, are evident throughout. His greatest wish was to open the hearts of readers drawn to his work.

"A fortunate few carry with them through life the vision of the innocent years. The rest of us must work hard to retrieve the light that is so freely given to us at birth. But if, in reverence for all life, in patient observation, in sorrow, and in compassion, the veil of darkness falls from our eyes, then it is we who are the lucky ones. For in full consciousness we have reached back into Paradise before the Fall. We have earned that which every child inherits unearned." --Rosamond Reinhardt, from the introduction

Readers Also Enjoyed The Three Candles of Little Veronica: The Story of a Child's Soul in This World and the Other

The Sea, The Sea

The Three Candles of Little Veronica: The Story of a Child's Soul in This World and the Other Reviews

Manfred Kyber, born in Riga (then under Russian rule), grew up on his father's estate. He studied philosophy in Leipzig and later moved to Berlin, where he lived for ten years and published his first works. He lived in Löwenstein, Württemberg (southern Germany) since 1923. In addition to poems, a novel, plays, theater criticism and an introduction to occultism, he primarily wrote fairy tales and a