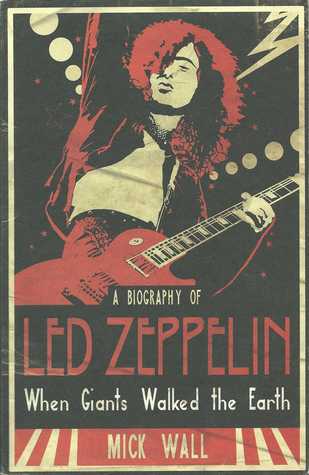 When Giants Walked the Earth: A Biography of Led Zeppelin

Veteran rock journalist Mick Wall unflinchingly tells the story of the band that pushed the envelope on both creativity and excess, even by rock'n roll standards. Led Zeppelin was the last great band of the 1960s and the first great band of the 1970's and When Giants Walked the Earth is the full, enthralling story of Zep from the inside, written by a former associate of both Jimmy Page and Robert Plant. Rich and revealing, it bores into not only the disaster, addiction and death that haunted the band but also into the real relationship between Page and Plant, including how it was influenced by Page's interest in the occult. Comprehensive and yet intimately detailed, When Giants Walked the Earth literally gets into the principals' heads to bring to life both an unforgettable band and an unrepeatable slice of rock history.

Readers Also Enjoyed When Giants Walked the Earth: A Biography of Led Zeppelin

Revolution In The Head: The Beatles Records and the Sixties

Heavier Than Heaven: A Biography of Kurt Cobain

Riders on the Storm: My Life with Jim Morrison and the Doors

Hammer of the Gods

When Giants Walked the Earth: A Biography of Led Zeppelin Reviews

Coconuts and Collards: Recipes and Stories from Puerto Rico to the Deep South Reading Reconstruction: Sherwood Bonner and the Literature of the Post-Civil War South Texas Splendor The War of Darkness Polarity #2 Griekse mythen Comfort Woman The Iron Door Mine The European Reformations The Wrong Woman

Mick Wall is an author, journalist, film, television and radio writer-producer, who’s worked inside the music industry for over 35 years. He began his career contributing to the music weekly Sounds in 1977, where he wrote about punk and the new wave, and then rockabilly, funk, New Romantic pop and, eventually, hard rock and heavy metal. By 1983, Wall become one of the main journalists in the early