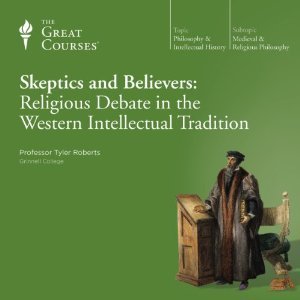 Skeptics and Believers: Religious Debate in the Western Intellectual Tradition

With the advent of modernity, the questions on which philosophers and religious thinkers had been reflecting for centuries underwent a dramatic and unprecedented change.

For over a thousand years, the existence of God and the importance of religion had gone unquestioned in the Western world. Any discussion was confined to the best ways of understanding and putting into practice a religious truth that had already been revealed.

But beginning in the 16th century, the Protestant Reformation and the Scientific Revolution began to erode the position of authority held by religion. A new willingness to confront religious authority and a new respect for reason and its accomplishments began to counter established ways of thinking based on revealed religious truth.

As a result, modern philosophy began to separate from theology, and new philosophers began constructing a universal, human rationality independent of faith. For the first time in human history, it had become possible to not simply ponder faith and its forms of expression, but to challenge it as a fundamental truth—and to even question the very existence of God.

This schism fundamentally changed the course of Western civilization, and it has had consequences that remain with us to this day.

Now, with Skeptics and Believers: Religious Debate in the Western Intellectual Tradition, noted scholar and Professor Tyler Roberts of Grinnell College leads you through a 36-lecture journey that will help you understand exactly what the debate has been and will continue to be about.

The Challenging Debate That Has Defined Western Culture

This conversation is especially important in the West, which still plays host to an active debate between belief and skepticism far more vigorous than in other parts of the world.

It's a debate that increasingly swirls around the role religion should have in our lives, not only in terms of our personal decisions about worship but over how much influence religion is to have in the public arena, including politics, education, and medicine and other sciences. And recent decades have seen a growing list of questions focused on that latter aspect.

-- Should "creation theory" be placed on an equal footing with the teaching of evolution in the public schools?
-- Should religious doctrine have a voice in determining the legality of contraception, abortion, or medical solutions to the inability to have children?

The unmistakable conclusion is that each of us has a vital stake in understanding the nuances of the debate as offered by this course, which can add significantly to the level of sophistication you already bring to one of today's most far-reaching issues.

By gaining a richer understanding of the key aspects of this debate—including the nature of the conflict, the meaning of the arguments, and what is at stake both philosophically and theologically—you also increase your understanding not only of Western civilization's past, but of the direction of its future, as well.

Drawing on some of Western civilization's greatest theological and philosophical minds, Professor Roberts has designed a course that spans a theological spectrum ranging from the purely religious to the rigorously secular as he explores the intellectual approaches taken to answering the new questions modernity made possible.

-- Is religion irrational and illusory or is it actually essential for human life?
-- Is religious faith merely blind submission, or can it, in fact, be part of an intellectually vital and realistic view of the world?

Skeptics and Believers is not a course in religious doctrine but one of intellectual and philosophical exploration. It examines more than three centuries of debate in the Western world about the nature of religious faith and its compatibility with reason, even-handedly following and analyzing the arguments of both skeptics and believers.

You will see how some of these argued their positions from a religious perspective—primarily Christian and Jewish, since the focus of this course is on Western thought—and how others approached the issue as one of pure philosophy. And you will also encounter still others for whom a separation between these two spheres was impossible, as well as those who sought to explain religion as a psychological or social phenomenon.

In examining the challenges to religious thought and the defenses mounted in favor of it through the Protestant Reformation, Scientific Revolution, Enlightenment, and subsequent periods up to the present day and a discussion of secularism, Professor Roberts draws on the work of a stunning range of provocative thinkers—each of whom changed the face of the debate and left succeeding minds a fresh array of insights to deal with:

-- Thomas Aquinas, the theologian whose integration of theology and Aristotelian philosophy made him the most important Christian thinker of the Middle Ages, his work declared by Pope Pius X in 1914 as "the foundation upon which the whole science of natural and divine things is based"
-- Denis Diderot, the French thinker whose materialist metaphysics helped mark him as one of the few professed atheists of the Enlightenment
-- Karl Barth, the Swiss theologian whose criticisms of liberal theology and Humanism fundamentally altered the direction of 20th-century Christian thought
-- Karl Marx, the political and economic theorist whose fame in laying the theoretical basis for Socialism and Communism has often obscured his provocative ideas about religion and the continuing influence of religious ideas in secular, even atheistic, contexts
-- Sigmund Freud, the father of psychoanalysis, who argued that God was an expression of infantile wishes and considered religion the "universal obsessional neurosis of mankind"
-- Daniel Dennett, whose 1996 Breaking the Spell is considered one of the most philosophically sophisticated critiques of religion offered by recent thinkers

And that, of course, is the merest sampling of a lineup that also includes Martin Luther, John Locke, Immanuel Kant, David Hume, Soren Kierkegaard, and many others.

Professor Roberts's presentation is roughly chronological, with a solid historical foundation laid in the early lectures so that the course has no prerequisites other than intellectual curiosity and a delight in grappling with—and grasping—profound philosophical and theological ideas. And his ability to present differing points of view even-handedly and objectively makes it hard to imagine having a more trustworthy guide through potentially contentious subject matter.

Just as important is his ability to maintain the sense of a true conversation across time, so that one never loses the thread of how one idea relates to another as he weaves a vast amount of material into a coherent whole.

The result is a course that is impressively synergistic, with the whole amounting to far more than the sum of its parts, and one of the most intellectually satisfying plunges into philosophical and theological thought you will ever take.

Skeptics and True Believers: The Exhilarating Connection Between Science and Spirituality

How To Read Genesis

Poisoner in Chief: Sidney Gottlieb and the CIA Search for Mind Control

Agony and Eloquence: John Adams, Thomas Jefferson, and a World of Revolution

The Universal Christ: How a Forgotten Reality Can Change Everything We See, Hope For and Believe

Rasputin: Faith, Power, and the Twilight of the Romanovs