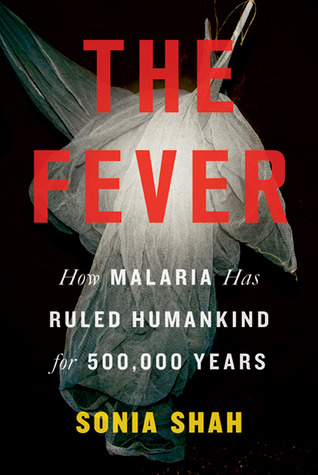 The Fever: How Malaria Has Ruled Humankind for 500,000 Years

In recent years, malaria has emerged as a cause cÃ©lÃ¨bre for voguish philanthropists. Bill Gates, Bono, and Laura Bush are only a few of the personalities who have lent their namesâ€”and opened their pocketbooksâ€”in hopes of curing the disease. Still, in a time when every emergent disease inspires waves of panic, why arenâ€™t we doing more to eradicate one of our oldest foes? And how does a parasitic disease that weâ€™ve known how to prevent for more than a century still infect 500 million people every year, killing nearly 1 million of them?

In The Fever, the journalist Sonia Shah sets out to answer these questions, delivering a timely, inquisitive chronicle of the illness and its influence on human lives. Through the centuries, she finds, weâ€™ve invested our hopes in a panoply of drugs and technologies, and invariably those hopes have been dashed. From the settling of the New World to the construction of the Panama Canal, through wars and the advances of the Industrial Revolution, Shah tracks malariaâ€™s jagged ascent and the tragedies in its wake, revealing a parasite every bit as persistent as the insects that carry it. With distinguished prose and original reporting from Panama, Malawi, Cameroon, India, and elsewhere, The Fever captures the curiously fascinating, devastating history of this long-standing thorn in the side of humanity.

Readers Also Enjoyed The Fever: How Malaria Has Ruled Humankind for 500,000 Years

The American Plague: The Untold Story of Yellow Fever, the Epidemic That Shaped Our History

How We Do Harm: A Doctor Breaks Ranks About Being Sick in America

Flu: The Story Of The Great Influenza Pandemic of 1918 and the Search for the Virus that Caused It

Ebola: The Natural and Human History of a Deadly Virus

The Cotton Kingdom: A Traveller's Observations on Cotton and Slavery in the American Slave States, 1853-1861

The Death Gap: How Inequality Kills

The Ten Types of Human: Who We Are and Who We Can Be

Rabid: A Cultural History of the World's Most Diabolical Virus

The Woman with a Worm in Her Head: And Other True Stories of Infectious Disease

The Fever: How Malaria Has Ruled Humankind for 500,000 Years Reviews

Reading Reconstruction: Sherwood Bonner and the Literature of the Post-Civil War South The Wrong Woman Top Secret Target The Wild Iris At Home in Mossy Creek Badjelly The Witch Montessori: A Modern Approach Not If I Save You First Gay and Catholic: Accepting My Sexuality, Finding Community, Living My Faith The Story of David Livingstone

Sonia Shah is a science journalist and prize-winning author. Her writing on science, politics, and human rights has appeared in the New York Times, the Wall Street Journal, Foreign Affairs, Scientific American and elsewhere. Her work has been featured on RadioLab, Fresh Air, and TED, where her talk, “Three Reasons We Still Haven’t Gotten Rid of Malaria” has been viewed by over 1,000,000 people